Russ Langmore is a main character in the Netflix series, Ozark. He is the father of Three Langmore and Wyatt Langmore.

Born in the nearby city of Osage Beach, Missouri, Russ was born into a family with Cade Langmore and Boyd Langmore.

He had an extensive history of legal problems with multiple arrests detailed in the FBI Database. Presumably has had recent arrests, with what appears to be a current mugshot in his file. While unclear, seems to have spent most of his life in the vicinity of the Ozarks with arrests in the nearby Camden County on 02/14/2010 and 08/01/2010.

However, he was arrested in 2007 in Jefferson City, MO for soliciting a 19 year old male prostitute which indicates he did leave the Ozark region on occasion.

Russ becomes romantically involved with FBI agent, Roy Petty, after the agent uses a fishing excursion to establish contact and build rapport. Agent Petty, gay himself, is aware of Russ's history with male prostitutes uses this information to build a relationship. Though the two appear to have legitimate feelings for one another, Agent Petty originally only engaged to gain leverage and information regarding Marty Byrde's illicit activities. 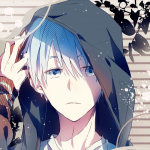